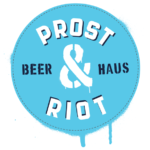 A new restaurant in north Mt. Juliet brings a German ambiance and flavor and it’s caused quite a buzz for those who want a cold brew and brats. Prost and Riot are not the owners’ names, but rather an homage to Germany. Lebanon resident and co-owner Brent Beimfohr who said his parents are both German, said “prost” is the German word for “cheers” as a salutation accompanied by beer. And “riot” is the German word for something funny that results in “intense, unrestrained laughter.

Check out our visitor's guide for Wilson County!